Get the app
Join the Caddie Club

The largest ever field for a Crazy Golf competition battled it out in sunny Hastings this past weekend. Nearly 250 players competed for the £5500 prize fund. Over the 2 days reigning and 3 times champion Marc Chapman was defeated in a tense final round, losing to the new champion, and former runner up, Adam Kelly. There were some unbelievable scores over the entire weekend. Adam finished on 35 under, averaging 31 shots per round over 7 rounds, 2 shots clear of second.

The weekend started on Friday evening with the team event. 26 teams of 3 played one round of the iconic Crazy Golf course. The top 8 entered into the sudden death knockout round, a new format for 2022. The final was played out on the infamous windmill hole, with two aces (holes in one) team Bogey Boys took the title.

The Saturday novice event was won by Richard Maud. Ben Steadman was the unlucky runner up, finally succumbing in a sudden death playoff. Both players finished on 11 under after 4 rounds.

Simon Tompkins Director of Hastings Adventure Golf said 'What a competition, what a weekend. The event is growing year on year, we had sold out as early as March so we tweaked the format to accommodate the highest ever number of players. To welcome players from America, Hungry, Wales, the Azores and even 2 teams from New Zealand is amazing! Next year is our 20th anniversary competition, the planning has already started to make it our largest yet!

Charity of the year

Now in our 4th year of supporting local charities we have teamed up with Dragonflies bereavement project. Dragonflies offers free support to children aged 0-18 years old and their families who are experiencing pre or post bereavement. We will be hosting various events over the season to help raise money for this fantastic project. For more information please see the link below - thank you in advance to anyone that attends an event or helps us support Dragonflies and their amazing work.

Miniature golf fun in a safe, secure way The government has moved the goalposts (or putting greens in our case) again. In line with what has been published we have made some slight alterations. We will now be selling last tickets at 9pm until the end of October, this ensures our floodlights are off prior to the 10pm curfew. We now ask that groups larger than 6, unless from the same household or bubble, do not attend our site. Just a reminder, the maximum groups size we allow on a hole is 5, this means the course can flow at an enjoyable pace for all players. All of our staff will now be wearing face coverings whilst on our site to ensure you, and they, are as safe as possible. All of the measures and procedures we have had in place since the start of June will remain unchanged. We will continue to evolve to ensure we comply through this very challenging time but we could not do it without the help and cooperation our customers. So thank you and we hope to see you soon, just not too late at night or in a large group :) 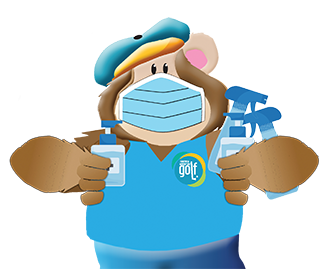